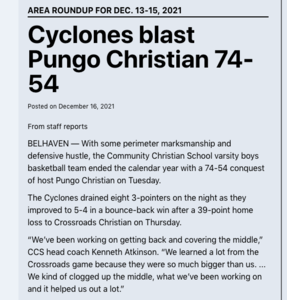 BELHAVEN — With some perimeter marksmanship and defensive hustle, the Community Christian School varsity boys basketball team ended the calendar year with a 74-54 conquest of host Pungo Christian on Tuesday.

The Cyclones drained eight 3-pointers on the night as they improved to 5-4 in a bounce-back win after a 39-point home loss to Crossroads Christian on Thursday.

Senior Aiden Smith hit a trio of 3-pointers on his way to a team-high 24 points while Seth Huston knocked down 16 points. Junior varsity call-up Evan Gattis came off the bench for eight points in the fourth quarter.

Tuesday was the final scheduled game of 2021 for the Cyclones, although Atkinson said the team is looking for a holiday tournament in which to participate. If not, CCS will be in action Jan. 6 at The Epiphany School in New Bern.

WARRENTON — Senior Christen Battle poured in a season-high 37 points as the Wilson Prep varsity boys basketball team climbed to 4-1 overall with an 89-51 rout of host Warren County on Tuesday.

The Tigers, now 2-1 in 1-A Tar-Roanoke Athletic Conference action, broke open the game with 30 points in the third quarter.

Battle connected on five 3-pointers and hit all eight of foul shots while finding time to dole out a team-high five assists. Brandon Anderson dropped in 14 points to go with four assists while Leslie Minter yanked down 10 rebounds. David Ellis added nine points and six rebounds.

The Eagles exited 1-4 overall and 1-3 in league games.

Freeman totaled 13 points, 12 assists and 11 steals, while also blocking two shots, as the Tigers raised their overall record to 4-0 with their third 1-A Tar-Roanoke Athletic Conference triumph. It was the first loss in four conference games for the Eagles, who dipped to 3-2 overall.

Wilson Prep roared to a 31-3 lead through one quarter, effectively putting Warren County into an inescapable hole.

“We set the tone early and it’s hard for teams to recover from 25, 30 points down, it’s just hard to come back from that,” said WPA head coach Corwin Woodard.

The Tigers, who will host KIPP Pride in a Tar-Roanoke encounter Friday, are averaging 79 points per game, which leads the state in all classifications and associations, per MaxPreps.com. WPA’s victory margin is 56.5 but Woodard knows that tougher matchups await his young team, so he’s not concerned with the lack of competition to date.

“I don’t think that’s a negative,” he said. “What kind of balances that out is they’re ninth and 10th graders so every game is an experience they can learn from.”

WENDELL — The Hunt High girls finished second and the boys placed third out of six teams at the QCC Polar Bear track and field meet at East Wake on Dec. 9.

The 3-A Quad County Conference Warriors posted an 81-point total in the girls meet, well off the pace of  victorious Cleveland of the 4-A Greater Neuse River Conference with 174 points. The Hunt boys garnered 40 points to finish behind winner Cleveland (249) and East Wake of the QCC.  Fike was fourth in the girls meet with 40 points and sixth in the boys meet with eight points.

Hunt freshman Valaria Zarate won the girls 1,000-meter run in 3 minutes, 54.5 seconds while classmate Kristen Frazier claimed victory in the 300 dash in 50.03. Junior Audrey Earp won the shot put with an effort of 29 feet, 4 inches. Hunt placed in the top four in the shot put.

Sophomore Caroline Adkins of Fike won the girls 1,600 in 6:24 and placed second behind Zarate in the 1,000 in 3:58.5. Golden Demons freshman Tynasia Emory barely lost the girls 55 dash, finishing in 7.46, a hundredth of a second behind Cleveland junior Saidee Stone.

In a boys meet dominated by Cleveland, Hunt ruled the shot put. Led by sophomore Trenton White with a winning heave of 40-11, Hunt’s Raekwon Matthews and Grayson Thorne placed third and fourth, respectively, with shots of 33-2 and 32-8.

Fike’s top individual finish was sophomore Khamani Barnes’ fourth-place showing in the 55 hurdles with a time of 10.16.

It was the fourth meet of the season for Hunt and the second for Fike. The Warriors were part of a seven-team field at Nash Central on Nov. 29 and a nine-team meet at Rocky Mount High last Monday, Dec. 6, sandwiched around the first QCC meet Dec. 2 at South Johnston. Fike’s only previous meet was Dec. 2 at Smithfield-Selma.

The next QCC meet is Jan. 13 with Hunt, Southern Wayne and East Wake at Fike.

BELHAVEN --— Coming off a close loss in the final of a tournament at Kerr-Vance Academy on Saturday, Community Christian hit the road Tuesday in the fourth of a five-game road swing. The Cyclones departed Pungo Christian with a 39-25 defeat.

The Cyclones are off until Jan. 4, 2022, when they visit Southside Christian in Selma.

The Bucks, also 2-1, were led by Nasir Hines with 20 points while Austin Joyner tacked on 10 points. Aarion Bryant netted 10 to lead Darden, which also got eight points from Rockim Warren.

The Forest Hills girls picked up their first win with a 29-26 decision over the Trojans (0-3). No individual scoring information was available on the girls game.

Host Elm City evened its boys basketball record at 2-2 with a 45-29 defeat of Springfield on Monday.

Elm City held Springfield to just two points after halftime as the unbeaten Vikings pulled away to a 42-8 victory, their fourth of the season.

Emory Skinner and Chloe Owens each dropped in 16 points for the Vikings, who only led 18-6 at the half.

KNIGHTDALE — Autumn Bradshaw led the way with 14 points as her Community Christian girls basketball team climbed back above .500 with a 30-5 victory Monday at Southside Christian.

Bradshaw added three steals and a 3-pointer for the Cyclones (4-3), who also got 11 rebounds from Claire Carter. Mary Abigail Lewis contributed five steals.

The Wilson Christian Academy girls basketball team could not keep up in a road game against Wayne Christian Tuesday night, falling 33-11.