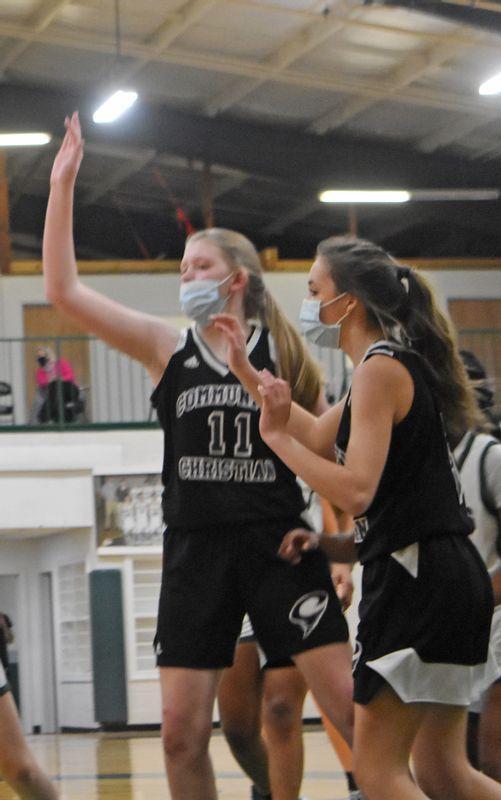 As Community Christian School’s basketball teams embark on a new season, they’ll be heading in a new direction on multiple fronts.

The Cyclones have left the North Carolina Independent Schools Athletic Association, and, for the first time in over two decades, will be a completely independent school, with no association or conference affiliation.

Additionally, both of the teams will have different faces from last season behind the bench, with Kenneth Atkinson returning to coach the boys team and Candi Watson taking the helm for the girls.

Both teams will open what they hope are seasons of growth with home contests Friday against Ridgecroft Academy at Peace Church.

Atkinson is returning for his second stint with the Community Christian varsity boys after coaching them three years ago. He spent the last two seasons leading the varsity girls team and the JV boys.

With the Cyclones returning just one player from last year’s varsity squad, which finished 8-5 and fell in the second round of the NCISAA 1-A playoffs, Atkinson knows this year will largely be about resetting and building.

“This is a rebuilding year,” Atkinson said. “... We’re bringing up players from last year’s JV. We’re focusing on rebuilding this year, and I feel like we’re going to be pretty good.”

Atkinson said this team’s strengths will come from its shooting, and ability to run in the open court.

This is a smaller team, so running the floor, sharing the ball and opening up shooting opportunities will be key.

The Cyclones have three key players they’ll rely on to lead the way in Landon Beamon, Seth Huston, and Ayden Smith.

Beamon is the team’s lone senior and returner from last year, and Atkinson described him as a strong rebounder and defender. Smith and Huston are both good shooters, and Atkinson also said Huston is a good rebounder who can drive to the basket.

“We’re going to have a pretty good team,” Atkinson said. “We just have to work hard and get together as far as moving the ball and getting each other open.”

With such a young team, the Cyclones could be a work in progress early in the season, but Atkinson’s hope is to see a team that learns and grows together and is hitting its stride as the season goes along.

“Everybody’s goal is to win as much as possible,” Atkinson said. “But the goal is for them to get stronger and stronger, because like I said, we’re a very young team. We only have one senior, four or five juniors. The main thing is that they learn to play together and get stronger as the season goes. I think they’re going to grow really strong as the season goes. Halfway through the season, we should be a really good team.”

While this is Watson’s first year as head coach for the Cyclones’ varsity girls basketball team, she’s spent the past two years as the team’s varsity volleyball coach, and also has spent time with the JV girls and middle school teams.

As she takes the helm for the Cyclones, Watson is hoping to grow interest in participation in the program.

“I would love to see the girls team grow and get stronger, have more girls interested and to get the program a little bit more competitive. get girls more interested in the whole program of sports,” Watson said.

Watson wants to see her team play with a high energy level and play a fast-paced, up-tempo style.

The Cyclones’ strengths will be in the number of ball handlers and strong shooters on the roster.

“I think we’re going to be able to have some strength on the outside perimeter, not necessarily just in the paint, but on the outside,” Watson said. “They can shoot very well. We’ve got some excellent ball handlers. So I think probably their strength is going to be more of those girls, they can drive very well. I think their strength is going to be in those girls with their shooting ability, their driving ability. Inside the paint is not as strong as I would like to see it. We are working on that. Our strength is more of the shooters.”

CCS will rely on Abigail Jackson and Olivia Kelly to be its top contributors this season.

Jackson brings a versatile skill set to the table, but will primarily serve as the team’s top point guard.

“She actually is an all-around player,” Watson said. “She can pretty much play any position. But what we need for this year is mostly the point guard because of her ball handling. Excellent ball handler, excellent shooter. She has a good eye to see the court. She’s also great defensively. She anticipates passes where she can steal very easily. So she is going to be one of our main players.”

Kelly, one of the team’s seniors, is a player Watson knows well, having previously coached her at New Life.

“I’ve coached Olivia for years and years in basketball, and I’ve seen her grow as a player,” Watson said. “She is an excellent ball handler, excellent shooter. She is very, very aggressive, very competitive. She also is one that can play any position. She has the height that she could play in the post if we needed her to, but right now we’re keeping her at shooting guard.”

As Watson embarks on her first season with the program, she’s focused on both immediate success and building the program for the years to come.

“I would love to see the girls obviously win games, but also work together as a team, also to get the younger ones up and coming so that they can take over,” Watson said. “We have several seniors on the team. But my goal is to also work with the younger ones and get them ready to be the leaders of the team. Right now, out of our starters, three of them are seniors and the other one is a junior. So we obviously have a lot of spots to fill in the upcoming years.