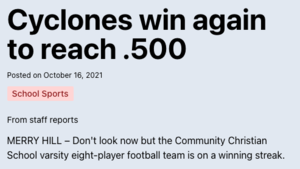 The Cyclones made it two in a row and evened their record at 3-3 with a 66-58 win over the combined team of Lawrence Academy and Albemarle School on Thursday evening. CCS rallied from a 24-16 deficit entering the second quarter to lead 54-44 at the half.

Cyclones senior quarterback Landon Beamon had another spectacular offensive performance as he ran for four touchdowns and threw for another four Tds. Beamon finished with 178 yards on 22 rushes while completing 11-of-19 passes for 223 yards. Aiden Smith snared all four of Beamon's touchdown tosses, part of a nine-catch night for 199 yards. Graham Norville added 61 rushing yards and a five-yard reception while Matthew Jackson hauled in a 19-yard pass from Beamon.

Seniors Copeland Farmer and Brandon Tyner each recorded 12 tackles while Beamon and Jackson made nine stops each.

The Chargers take aim at a winning season when wrap up the campaign Friday at Bethel Christian in Kinston.