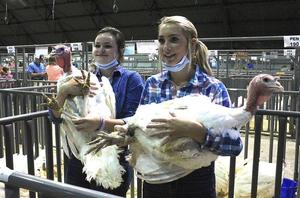 Hailey Batchelor, agriculture teacher and adviser to Community Christian’s Future Farmers of America chapter, said she was proud of her students. “In terms of their learning that took place, it just shows that that can happen outside the four walls of a classroom,” Batchelor said.
https://youtu.be/nLlMdY5nAEw
Drew C. Wilson
dwilson@wilsontimes.com

RALEIGH — Madison Hudson and Alexis Gardner were still practicing their turkey technique Thursday as the minutes ticked down to the youth market turkey show at the N.C. State Fair.

The Community Christian School seniors practiced their form in flipping 22-pound birds upside down for the judges to inspect.

Madison had never raised a turkey before and said the hardest part was having her three turkeys, Billy, Bobby and Joe, chasing after her and being mean.

“They’d peck me out of the fence,” Madison said. “They just didn’t like me coming into their pen. They had a really big attitude, worse than mine some days.”

Madison brought Billy with her to Raleigh.

Hailey Batchelor, agriculture teacher and adviser to Community Christian’s Future Farmers of America chapter, said she was proud of her students.

“I am excited for them,” Batchelor said. “They got these poults in the middle of June, so they raised these birds since they were just a few days old. They have been working on it all summer long. It was their summer project, and now they have come to the day of the big show. This is my first group of students to make an interest in showing turkeys at the state fair.”

Batchelor said the seniors’ birds behaved well and each received sixth place in its division.

“In terms of their learning that took place, it just shows that that can happen outside the four walls of a classroom,” Batchelor said.

“We had 18 sign up for the youth market turkey show and we had about nine actually be able to take their turkeys to the fair,” Manning said. “Turkeys have to weigh at least 15 pounds at the time of weigh-in and check-in, and they can go upward of 35 or 40 pounds. So these are very large birds.”

Wilson County didn’t have any first place winners this year.

“This is the first year that we have had this many that signed up for the program,” Manning said. “We normally don’t have that many.”

Manning said she enjoyed seeing all the young people come together to share knowledge.

“They are already talking about how they want to change things for next year so they can grow heavier turkeys,” Manning said.

Several competitors were members of the Small Town Clovers 4-H Club near Saratoga and Stantonsburg.

“It’s fun. I get to show my turkey and try to come out here and win first place,” said Tuck Webb, who raised a 23-pound bird on soybean meal and hog feed.

“You learn responsibility for kids that don’t live on the farm and stuff,” Tuck said. “You just need to go out there and spend time with them and feed them.”

Both of Tuck’s sisters, Willow and Shelby, brought turkeys to the fair.

“It’s just a good opportunity that N.C. State gives children to learn responsibility and respect and growing things on their own and understanding that it’s going to the table one day. Kids learn that concept instead of scaring away from it,” said Tim Webb, the children’s father. “N.C. State is a huge supporter of youth and livestock and 4-H, so I just give a lot of credit to North Carolina State.”

“It’s a lot of about teamwork and responsibility and just being able to raise these turkeys from day one and then (having) to wash them before the show,” Manning said. “It is a family and friend affair.”

“I am super proud with every effort they have made, and not only the 4-Hers, but also their families because a lot of times, Mom and Dad have had to help feed the turkeys and wash them,” Manning said. “When you have something that weighs just as much as your 5-year-old child, it takes a team effort to do it.”

Some families like the Webbs have raised turkeys for several years.

“I am hoping they continue with it because I want to have a grand champion turkey from Wilson County sooner rather than later,” Manning said. “I think it would be an awesome experience.”

Wilson County has about 12-15 more young people participating in livestock competitions for market goats, steers, heifers, pigs, sheep, lambs and horses leading up to the fair’s opening on Thursday, Oct. 14.

Competitions aren’t open to the public, but grand champions in every species will be on sale at the fair, which runs through Oct. 24.

For tickets and more information, visit https://ncstatefair.org or call Etix online support at 919-653-0443.